Oil Pulling. Just writing the words makes me gag. In fact, you can be confident in the knowledge that I will be dry heaving at this cafe with free wifi while I write the chilling details of my experience.

Let me start by filling you in on this growing trend. People are guzzling oil (vastly coconut or sesame) for what feels like DAYS (20 minutes) and claiming it’s curing every ailment they ever faced (namely curing hangovers, gingivitis and headaches, as well as whitening teeth and removing “toxins”). If you read that sentence without my asides then it sounds quite seriously insane. Obviously, people dig it.

Oil pulling originated centuries ago and started as a simple practice to improve oral heath. The thought is that the mouth is the door to the body’s many toxins and is the best place to start if you want to get them out of you. Google trends will show that nobody gave a flying fuck about oil pulling until around 2007, with a mega spike in 2014.

Why did the Google loving North Americans start turning to oil pulling? I can only assume it’s because the massive amount of times they use the word “toxins” whenever it’s mentioned online. People love toxin shit. But you don’t come here for my incredible assessment of fad history (she screamed into the empty abyss to noone), you come here for the gritty details.

I decided to try oil pulling for a week and see what all the hullabaloo is about. Many sites recommended I start swishing for 5 minutes in the morning before I ate and work up to 20 minutes. I went out, bought some virgin organic coconut oil (thank you, Trader Joes, for not breaking the bank) and dived in with two full tablespoon. Two. Full. Fucking. Tablespoons. If you have heard of this trend at all- or followed the above link at the top of this post, you know this is not the correct amount. This is in fact 6 times the correct amount. Don’t do what I did on day 1, do 1-2 teaspoons instead. Like you’re supposed to.

It was with this fatal mistake that I was swept into what felt like a strange quiet version of Hell for 5 minutes. So much oil!Not enough mouth space! When 5 minutes of Gossip Girl finally passed, I already had a trash barrel waiting at my feet ready to catch that devil juice. Many articles make it very clear not to swallow any of the oil you’ve already swished as it is FFuuuUUUlllLLLLL of TToooOOOxxxXXXinnnNNSSSss (I call that Spooky Caps) and truly reverses any positive affects you could have reaped. Some sweetie articles do mention not to beat yourself up if this happens, though. Aw! Thanks internet.

And so, I trekked on, with the new knowledge that nothing would be as bad as the first time (had that thought before). I went a full week of swishing in silence to the sounds of coffee boiling and skirts being tried on with many delightful dry heaves along the way. It became a kind of ritual in my unstructured holiday break mornings, a time to be quiet and zen. And I was happy to find that I did start to feel like my mouth was kind of…empty? My teeth felt very stripped down, in a good way! Perhaps it was my hopefulness, but I think my debilitatingsensitivity to cold and hot (don’t you dare bite a popsicle in front of me) even diminished. Unfortunately, my weak stomach and low constitution for icky stuff (it’s a medical term) got the better of me. I stopped one day short of a week and honestly don’t think I will be able to have coconut oil for the next couple of months. 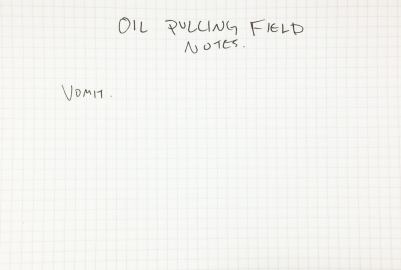