What is the best fad to start with? Something easy! Something accessible! Something I secretly have been dying to try regardless of whether I decided to write about it or not! Obviously, there was only one trend that would fulfill all of these criteria, “one fad to rule them all” if you will: padded butt underwear. What’s that you say, that padded butt underwear is the stupidest thing you’ve ever heard of? I beg to differ, have you heard of that TV show where they drop naked people into the jungle? Well, it exists, and padded butt underwear is far more useful!

Shall we first dive into what makes this strange, new under garment fad worthy? First of all, there is a playlist that keeps coming up on my Songza called “2014: The Year of The Booty”. That such words were ever strung together should be evidence enough!  Perhaps it was with Kim Kardashian’s butt’s rising stardom or perhaps with Nicki Minaj’s butt-filled record and accompanying performances that a larger than normal bottom has become all the rage. But with fame, comes rumors. Were these women faking their amazing assets (lolz- I’m hilarious) and if so, could we peasants do the same?! With the questions came the need and with the need came the products.

I’ve had my eye on this trend for some months now, looking on with forbidden jealousy at the women who took their flat asses into their own hands and slapped on some padding. As a woman of excessive curvage, my lack of a backside is just unfair! 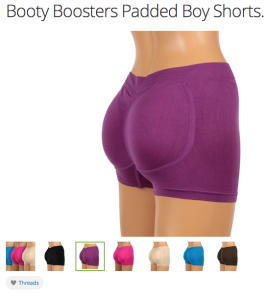 Luckily, my blog came along, and with it a means to buy the most unlikely groupon ever (in the purple shown, of course). I swear they look just as good on me as they do on that malnourished mannequin. I decided to wear said garment on a day where I assume my ass is looked at the most, the bar I work at. Did I not tell you I work at a bar?! It’s very cool and resourceful of me, not to put words in your mouth! Anyhow, I work a day or two a week at a lovely pub where all sorts of creatures of the night (and day!) call their local haunt. While everyone there has always been an (almost) perfect gentleman, the place is loaded with mirrors and what kind of narcissist would I be if I didn’t check to make sure I was getting stared at every once in a while? So I put on my Booty Booster Padded Boy Shorts (for ladies) and my insanely flattering magic apron and set off for a big-butted adventure.

I thought I could get away with not having a before and after picture of my bod in this post, but it has become clear that the article really is not complete without this terrifying visual. Please try to focus as much as you can on the granite wall (perfectly in focus) instead of my awkward posing (blurry as it should be). Special thanks to my roommates Sara and Malika (get used to these shout outs- I am weirdly obsessed with my roommates) for being my backside photography benefactors and artists. Okie dokie, deep breaths, the picture is coming at you after this page break…

TADA! Did I feel different on the drive over as a newly endowed woman? Yes, because I was wearing padded underwear. It was like sitting on a cloud! A cloud poofier than the cloud I usually sit on! Though, with the layers of underwear, booty boy shorts, booty pads, pants and apron, I did feel like I was wearing a thousand extra layers. The padding was centralized to the top/middle sector, and made for a (what I assume was) very Beyonce-eqsue high and tight look. I can’t be sure if it looked like I had actually worked out for once in my life OR like I had had an extra donut that morning (which I hadn’t! I swear! I swear on the extra donut I had! Dammit). 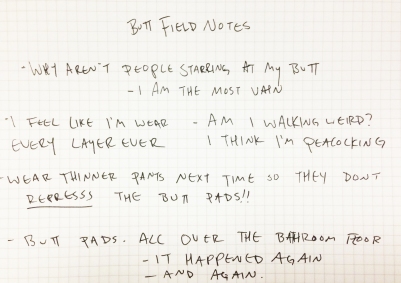 Whether or not I got extra stares? I suppose it’s hard to say. But what I can say is that I felt like a freaking Boss. I started walking like I had something to show off. I started ACTING like I had something to show off! Are these Booty Boosters the answer to my confidence woes?! Well, nothing brings down a confidence high like having your butt pads fall on the bathroom floor every time you use the restroom (though the thought crossed my mind to safety pin them securely inside their boy short home). It’s strange, I felt rather bulky with so many layers on my bottom half (my fly refused to stay closed behind my magical bartendress apron- so I secretly let it fly open and free all shift) but yet I still felt more confident than ever! I daresay that The Year of The Booty is doing the women of our society some good! My curves were feeling more en vogue than ever.

As you can see by the below Carly Barometer (name pending), I was into this experience in a way I can’t say I’m proud of. Call me a Fad Optimist, but I endorse wearing padded butt underwear! I admit it, OK!? I don’t endorse that groupon though, I saw the same pair classing up the window of a $1 store in Echo Park.