Know what I think is the best kind of fad? The ones that turn your body into a weapon of mass destruction! The ones that bring new meaning to the term “Girl Power” (RIP Spice Girls)! And what could make a girl feel more powerful than gluing knives to her hands for a week? Before you say, “Carly, you crazy kook, that’s no trend!” I invite you to take a trip to my new best friend/nail stylist Lisa who helped me do just that.

It’s called Talon Nails folks, and it basically makes you look fierce in a more literal way than I could ever hope for.

Popularized by the darling of the nail community, Lana Del Rey, Talon Nails (or, more commonly called Stiletto Nails, or Kardashian Nails) are a trend of throwing on some fake nails and sharpening them to a point that would make Chritospher Walken’s character in Sleepy Hallow cringe.

People have been doing it since 2009, but popularity spiked in a major way since December 2014 (perhaps because RiRi and BB were seen rocking them late last year). In the celebrity world, various Fad Ass Bitches have sported Talons on the Instagrams and beyond (as if there was anything beyond the Instagrams).

This fad came to me by way of East Coast faddist correspondent, Caroline “Fayzer,” and I knew immediately that my hands would be sporting those bad boys within a matter of days. If nothing else, it would be a glorious homage to my ultimate middle school heartthrob, Edward Scissor Hands (I was a lonely child). I made an appointment with the cheapest nail salon within walking distance of my office and prepared for my transformation into a monster babe.

I walked into Saigon Nails of beautiful Burbank and knew I had come to the right place. The joint was hopping (proof below). After painstakingly flip-flopping between wanting the sparkliest, most tubular colors they had to offer and something more neutral (aka, cheaper) I settled on a color that would best simulate my transformation into a bird woman: the glorious talon color of a mother-flying bald eagle.

My eyes settled on the clock, knowing I had but a mere lunch hour to get the deed done, and told my new BFF Lisa to begin work on her masterpiece.

The process was freaking elaborate. They had to cut my nails down (an exhilarating experience for a recovering nail biter), buff them, glue on the big guns, rebuff, shape the new nails, rebuff, acrylic the crap out of them, rebuff, then paint on my (once again switched) color.

The process was not helped by the fact that I wanted to take a thousand photos but thankfully Lisa was chill with the paparazzi documenting her artistry.

After exactly an hour, I left with a warning from Lisa to “be careful, these can rip your nails off.” WHAT. LISA. WHAT?! She explained to me that since Talon Nails (or as she called them “Ohhhh, you mean pointy nails”) end with a crisp tip, they have to be thinner and therefore are a little flimsier than regular acrylic nails. The fear of the Fashion Gods had been put into me, but my excitement to join the ranks of The Fierce crushed any misgivings. “Beauty is pain” had never rung so true.

I walked out of Saigon Nails a new woman; a woman who couldn’t stop taking photos of her nails. Do you know how much fun it is to take pictures of your hands holding shit when you have long nails? Seeing as my hands typically look like a teenage boy is experimenting with his sister’s nail polish, I had no idea! 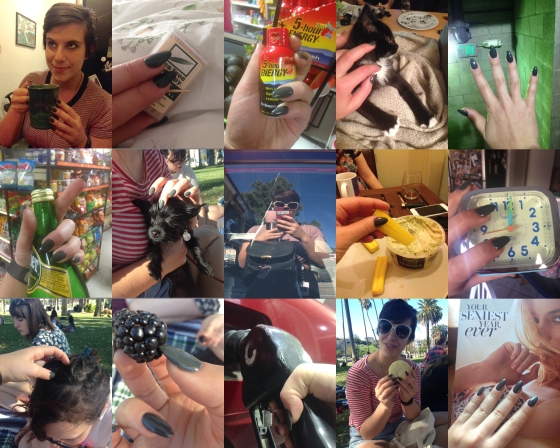 A comprehensive detailing of what a typical weekend in the life of a Carly is; eating snacks and petting any animal that crosses my path.

I was living a life of luxury. I started gesturing with my hands just for the attention my nails might draw. I began pointing at things that had no business being pointed at (sorry, unsuspecting neighbors). I couldn’t stop throwing my Talons in front of me and thus looking like I had a new addiction to doing jazz hands.

But it wasn’t all fun and games, mainly because I was constantly about to lose an eye. Bitches were maddddd pointy. At times this came in handy! For instance, I didn’t need to dirty any utensils to flip my bacon. PIC. I also has some amazing experiences scratching my head, and the heads of others. Animals were huge fans of the Talons, though at one point I got Talon hubris and got scratched by a stray cat who wasn’t into strangers (and has since seeked its revenge on me by having loud cat sex in my backyard).

Desk job life (#deskjoblife) was not made any easier by this trend. Typing with pointed nails turned me into an adorably tech illiterate grandma. I had to type using one finger at a time, and even then I was working with a 50% success rate.

With texting I had the same issue (NOOOOOOOOooooo!!!!) and found my messages even more unintelligible than usual (any friend who has corresponded with me via text or email knows I am not a fan of correcting my many mistakes).

Typing was not my only Talon issue. I could no longer perform many basic human needs. For instance, I could not open chip bags without assistance! I could only enjoy my can of La Croix with a buddy there to open it for me! These two examples alone were enough to make me question the viability of being so fierce.

As far as the public’s reaction, I have come to a conclusion that is almost theorem worthy: men hate these things, women love them.

Almost every female that commented on the Talons responded with awe and elation. It seemed like women still thought the trend was fun and silly, but liked it that way!

Men, on the other hand, tended to think I looked horrifying and stupid. After years of keeping that fact underwraps I couldn’t believe it took Talon Nails to make my veil of sanity finally slip!

In conclusion, Talon Nails are basically a good time IF you’re into chasing away potential suitors with animal like precision.

One by one, my nails began to break (the first casualty happened 2 days after I got them) leaving me looking like a Grey Gardens resident. This would have been fine if they all would have fallen off, but alas, 50% of them still haven’t budged
after 2 weeks!

I tried cutting them down to look more normal, but cutting acrylic nails is no easy task. I have almost resigned to the fact that I am going to have to get them professionally removed by a nail surgeon (Lisa!) but paying any more money towards this fad seems superfluous.

More than likely, if you run into me in the next month I will have a diminishing number of absurdly long nails. 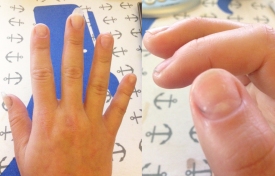 UPDATE: I have officially picked off every last nail. The exposed human girl nails underneath are now sad, thin and flimsy. I warn you, the satisfaction of pulling off the fake nails IS NOT WORTH IT. My nails look like the insides of a malnourished oyster shell.

My suggestion is this: if you want to have a weekend of feeling badass and chic as fuck, go get a set of press on nails from your local pharmacy and shave those puppies into the points you require. But if you have $30 to spare and you’re looking to go big, go see my pal Lisa at Saigon Nails and ask for the Carly Discount (which is most likely a charge of 125%, sorry). But for goodness sake…GET THEM PROFESSIONALLY REMOVED.

One thought on “Talon Nails: Scratching Out the Eyes of the Haters”