Ever find yourself in a social media hole and suddenly you wake up and have no idea how you got to the instagram you’ve found? We’ve all been there, and while usually when I awake from my daze I am on some exboyfriend of a current girlfriend of my exboyfriend’s page, last week I found myself on #FullLips.

Tracing back my steps, I realized I had been rifling through beauty regime instagrams for photos of Lip Contouring and

Thus, I found myself deep in the depths of wishful thinking. It took me about 10 minutes to hastily buy the shit out of whatever these freaks were selling, which turned out to be the FullLips Lip Enhancer. I am not proud that I spent $25 on a piece of plastic, but, like all of my purchases, I remembered that Amazon Prime offers free returns (I have literally never taken advantage of this aspect of the service).

Perhaps, at this time, you are feeling like this is a strange way to start a post? What about this post is different? Why do you feel so weird about this?! I will venture to guess that it is because…I DID NOT BUY THIS PRODUCT WITH MY EYE ON THE BLOG. I know. I too am ashamed. I bought this thing with every intention of using it in secret for my own damned benefit.

Luckily for you, the outcome was too bizarre not to share with my dozen readers (yes, you! You are one of my dozen! ThankYouILoveYouIWillDoAnythingForYouIncludingATMILoveYouSoMuch!!!!).

I received my tiny package in the mail and ripped it open like the fiend I am, all the while yelling “THIS BETTER MAKE ME BEAUTIFUL” and crying tears of anticipation.

My wee little lip plumper had arrived. I wasted no time putting it to work. Let the superfluous selfies BEGIN! 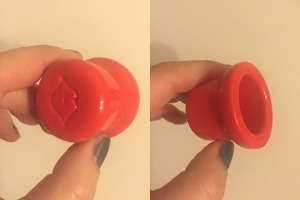 The way this gadget works appears to be relatively simple. You use it as a suction cup around your lips, suck all of the air out that you can, and let your lips fill the space for 10 to 15 seconds. You repeat until you basically feel like all of the blood from your entire body has gone to your lips.

It’s a bizarre sensation! You can actually feel the moment when the blood rushes into your lips. They start to swell, and when you dump ’em out, you can actually hear the cartoon “baBAM!”

That’s right, friends, it’s a penis-pump for your mouth.

Having a relatively substantial lower lip already, that thing blew up to some pretty unattractive proportions. I spent a lot of my time trying to get my top lip to follow suit.

Befores, Afters, Contours, and a pic of proof that I clean up nicely

To my surprise, the effect is actually quite dramatic! I even found myself a little addicted to that feeling of blood rushing. Ohhhhhhh and your lips get all tinnggglllyyyy at the end! I contoured up those buddies [with a Wet and Wild lip liner and Burts Bees Sugar Petal lip color- if anyone cares] and hit the streets with my usual fad-confidence-boost.

And people noticed! People asked if I had used lip venom or gotten stung by bees! When people starting asking me if I was OK, I could only hypothesize that the swelling had gone down and I was looking BORING and NOT PLUMPED.

I practically ran to the bathroom to get my lip enhancer fix. But when I looked in the mirror I met a horrible surprised. Not only had my lips deflated after only 1 hour, but I had almost no color in my face. For a moment I thought I must be sick as a dog and didn’t even realize. Then it dawned on me that my best friend, the lip enhancer, had treacherously betrayed my trust.

That thing must have sucked all of the life out of my mouth! Even worse, the area above my top lip (read: mustache) turned blue too! How could anyone love the blue mustached, purpled lipped creature I had become?! My FullLips Lip Enhancer was actually a gosh-darn lip vampire. Curse you!!!

I thought perhaps my lips were bruised, but after some quick googling, I found that it is “normal” to have blue lips for up to 24 hours after the enhancing experience due to “lack of oxygen to the area.” #GREAT!

But what could I do besides plump those puppies back up again? It was a never ending suck fest.

I can report that the reviews were not wrong, my lips returned to their lack-luster color and plumpness after around 24 hours. And it could not be denied, it made my lips were bigger than they’d ever been! But was this experience worth $25? I knew that only SCIIIENNNNCEEEEE would give us the answer.

The first thing to do was test other people’s reactions to the product. I went to the most savvy set of test subjects that I knew, my darling roommates.

The Magical Malika Mo provided feedback that the product was not nearly as easy for some people to use. She could not achieve the desired suction (a sentence that will never be uttered by me again) and once she finally got it to stay on her lips, she found it hard to breathe. While this was some very useful information, it was also hilarious to watch, and she has kindly let me share this star-worthy video of her efforts. Apologies that these videos are so oddly shaped and thus massive:

BONUS NON-ROOMMATE FRIEND (I have them!) Handsome Andy (though he has already qualities as well, they hardly matter) had a similar issue:

Dearest Sara Darling had much more success with the mechanics of the Lip Enhancer. Her already kissable pout (that I’m like..so not jealous of at all. Whatever. I have other stuff going on, OK?) was made all the more massive! Success! Until she sent me the following picture of the bruise that it gave her on her lower lip:

There had to be a better way to achieve this Kylie Jenner level of lip misdirection!! If every time I was going to use this bitch I ran the risk of giving myself a bruise-mustahce, I was not going to spend $25 on it!

I searched my brain for a household object that could take it’s place. Bottle cap? Too prickly. Cup? Too big. Lipstick cap? Too small. Then I finally found it: a shot glass.

So natural at taking pictures of myself. Can’t we all just agree that I’m “brave” for not photoshopping myself, and call it a day?

A shot glass, though taking considerably more repetitions, had almost the exact same effect. The shape of the glass wasn’t exactly perfect, and in fact it kind of sucked my tongue out of my lips (hysterical, I promise), but the effect was strikingly similar.

Today, I plan to pack up my slobber-covered FullLips Lip Enhancer and send it (with free shipping!) back to the Amazon warehouse from whence it came. Will I actually ever get around to doing this? History tells me, probably not. Do yourself a favor and spend $25 on filling up your shot glass with whisky.