Can we just talk about the elephant in the room? I KNOW I haven’t written to you, my dear Faddists, in many moons. Stop hassling me about it! I was moving, OK?! I got v v busy, guys!! What’s that? Nobody cared? I’m sorry, did you say that if I hadn’t mentioned it, you wouldn’t have noticed? Well, shit. Forget I said anything.

Know what else I haven’t done in a while and probably shouldn’t be mentioning? Worked out. I have truly let myself go. Wait, does walking count? Nope. So, yeah, I haven’t been doing that. Which means there is a whole world of emerging weirdo fitness fads that I haven’t been privy to!

I knew just where to begin my search for bizarre crazes: the Crunch Gym website. 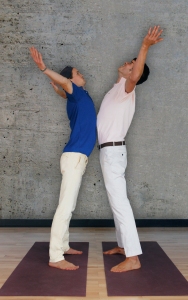 Have you ever seen on of those gym’s schedules? They are insane! They have a class where a comedian makes you laugh during a cardio workout!! I KNOW! It sounds amazing!! Sadly, they only have it at like 11AM on Tuesday’s in Burbank, so, no.

They have ariel yoga! But, my grandma probably does ariel yoga by this point.

They have a class which uses drumming and weighed drum sticks as it’s soul fitness regime! Hysterical! Just as I was about to sign on for this rock star wannabe nonsense…I saw a word. A word that may not have caught my eye right away; but once I saw it, I knew my search had come to an end…Broga®.

What was this magical word? Why did it have a fancy ® after it? Why did saying it make me want to wear pastel shorts and topsiders without socks?

A quick google search demystified the trend- showing it’s slow climb to fitness fadom starting in 2007. Apparently, some Big Dawg named Robert Sidoti who ACTUALLY bodes from Martha’s Vineyard (my topsider spidey sense has never led me wrong) decided that it was soooOOoooOoo unfair that men just DIDN’T have enough exercises to do where they could swoll out among their own kind!

So Sidiot creates an exercise to bring men back to the mat. You may find yourself saying, “oh, I didn’t know men weren’t welcome at yoga” to which almost everyone in the world would respond “yeah…that is not a thing.” Perhaps we should take down the “GRLZ ONLY” sings from above our ashrams? Sorry for leaving you out, guyz.

OK so now that I have set the tone of the ridiculousness of men demanding more rights to exercise away from the terrors of the female gaze- imagine my excitement when I realized that the only gym in my area that offered this class was perhaps the most male centric: The West Hollywood Crunch Gym.

I could go into detail about what makes this gym lady repellant, or I could just quote Olivia the Office Bestie when she told me that her uncle had “met his last three boyfriends there.”

Oodles of beefcakes from the surrounding pride-filled neighborhood call the saunas of this establishment home. If there was any place in America where women would be less welcome- it would be a class at this gym with the word Bro in the name. Perfect.

Crunch Gym makes you jump through all the hoops to make sure common peasants don’t infiltrate their gym. Since I had tried to get a one day guest pass form them once before- I had to use a work email and phone number in order to sign up a second time. UGH. Don’t they know it takes me forever to figure out my work phone number? Jeesh.

About a second after I submitted my guest pass request I got a call from Mike at Crunch Gym confirming what time I was going to come in, and notifying me to be there an HOUR in advance so I could take a stupid tour.

CRRRUUUUUNNNNCCCCHHHH please give me a break! Can’t you tell by my lady voice filled with conniving ulterior motives that I am NOT going to commit to your gym!?

I showed up, and I kid you not, this place was bumping like a club. They had lights going, they had a DJ SPINNING. No lie! I have proof below! They had a table set up with margaritas and chips! They have tenderoni’s walking around in short shorts! Finally, a gym fit for a Carly!

Unfortunately, I wasn’t left to party for long, because fucking Mike came along to harsh my buzz. He showed me around for all of a minute before he asked why I was there.

DAMMIT MIKE. Why’d you make me come here an hour early if you were going to cave so easily? I decided to pass the time like any lazy sad-sack would: by walking slowly on the treadmill for an hour while I watched 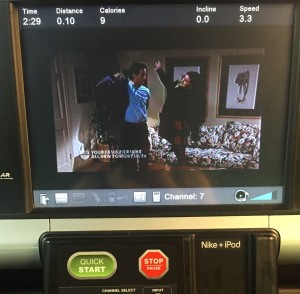 Finally the time came for me to enter the man’s world of light stretching. I entered the studio to see a group of six men apprehensively figuring out which way their mats should face. I would be lying to you if I said that I wasn’t taking sick pleasure in the discomfort my entrance had caused. This wasn’t my first time at the rodeo when it came to men being disappointed at my arrival.

I sat down at my mat and tried to make a show of my natural womanly stretchiness. After a few minutes, the teacher asked The Question: is it anyone’s first time?

Every single man raised their hand. I was overcome with a sudden case of imposter syndrome, my anger melting into understanding. These guys were gathered together in a safe space to try something new. Daw, guys! It’s OK! No judgement!

Just as I was beginning to understand the Human Gender, a voice reached through my blissed out state to pull me back into a baby feminist rage (shout out CYG). The teacher announced that they weren’t doing Broga® at Crunch anymore.

JUST LIKE THAT. AS IF SCHEDULES MEAN NOTHING! As if people explicitly saying “I’m here, an hour early, on my one and only guest pass, to take this very specific class” was not enough to make anyone mention that they don’t even offer it anymore!

In hindsight, I should have stayed and saw what shapes the emerging Brogs® would get stuck in, but god damn if I don’t love a huffy exit! Stupid men and their stupid not caring about schedules and that stupid guy who had canceled a date on me that night and all the stupid world and it’s lack of consideration for my time HEAR ME ROAR (yikes on bikes, baby has some anger in there!)

I marched out of the studio and into the office to give Mike a piece of my mind! But of course the second I entered the office, all I could muster was “so, did you know that you don’t offer Broga® here anymore?”

Mike swiveled his chair towards me, offered a “hm” then swiveled back around and mumbled that they should change that on the website.

I grabbed a margarita and went on my quiet way. If Crunch Gym’s main objective was to keep me away from the premises for all of time, they had succeeded. Dang, did I get played? Sneaky, sneaky WeHo-ites…

I knew I couldn’t give up on this fad. It was the only trend-hunting I had done all month! So I hunkered down in my living room for some good ‘ol youtube Broga®. I was ready to get that “pumped-up feeling you get from working out and a deep flexibility and relaxation feeling from “working in.”’

I practiced along for all 5 minutes before it became abundantly clear…this was just yoga. With a few more planks than usual.

What is all the fuss about, bros? Why you got to make excuses to do yoga? Shit’s good! Broga® (are you sick of my incessant ®’s yet?! I love em!) may have a SuPeR CuTe name, but at it’s heart that is all it is. A name that may aid in repelling intimidating women.

So there you have it, my not so triumphant return to fadding. Gents- if you want to practice yoga, you’re going to run into some hot ladies in yoga pants. I know it sucks! It makes me feel insecure too! But it will be a hell of a lot less time consuming than hunting down a Broga® class.

Alternatively, just gather your friends and do it in your living room! My heart just grew three sizes imagining a group of buds starting a yoga club together. Guys, make all my fantasies come true!

One thought on “Broga®: For Insecure Men and Carlys”