I AM SO JIZZITY-JAZZED FOR JUNE!! You have no idea how many weirdo things have popped up on the faddist radar! This summer is going to be filled with Guy Fieri worthy foods, delightful feminist movements, and bizarre events I force my “friends” to go to. Who will reap the benefits? US. We will weed through this season’s insanity together.

Today’s fad is brought to you by one of my closest friends (literally, because we spent about 4 years living under the same roof), MaliMo. Since she is a fucking lady boss, she was casually working the Academy Awards’ red carpet when she saw a strange box that the stars kept going in and out.

She inquired as to WHAT WAS IN THE BOX and found out that it was a popular treatment among the rich and famous, Cryotherapy. Essentially, it’s a human sized chamber that gets down to -250° F and promises eternal youth.

I was sold. BUT CARLY, THAT SOUNDS DANGEROUS, SHOULDN’T YOU DO ANY RESEARCH WHATSOEVER BEFORE YOU SUBJECT YOURSELF TO THIS TORTURE?! Nah, I’ll figure it out, thanks bb!I strolled into the same facility that graced the red carpet, CryoHealthCare, and was immediately greeted by possibly the happiest man in earth, Dr. Jonas Kuehne. He gleefully told me that they were actually closed but he would have no problem fitting me in. Like, STAHP, red carpet treatment for little ol me?!

Usually, when I go to try fads, I try to tell NO ONE what I’m doing for fear that they will read the article, see that I gave them a bizarre nickname, and try to kill me. Or worse, read the blog while I’m there and think I’m not funny! But I’m trying to do that thing where I say I’m a “writer” and somehow it becomes true soooooooooooooooooooooooOOo I told them right away.

To my delight, the gent behind the counter was stoked to have me there and began telling me all of the wild details of the treatment. Thank goodness I didn’t waste 10 minutes of my time looking this up beforehand!

He told me that the treatment began in the 1978. It is the European equivalent of FDA approved across Europe, and is used primarily to treat arthritis and other joint disorders. He told me that the process essentially flash freezes you, sending your body into a temporary survival state. It shoots you with adrenaline and endorphins and YES at this point I knew I was going to get addicted.

As Dr. Jonas is telling me every detail about the history of Cryotherapy, his beautiful knowledge filled face popped up on the screen behind him. I immediately interrupted his speech about boosting your metabolism [why couldn’t I have waited one more second?!] to find out what level of cryo-celebrity he was.

Turns out Jonas fucking opened this facility as the first Cryo spot in America after he moved from Germany. He mentions that he is “not young anymore” and thus I am convinced that he invented this trend in the 1800s and is Dumbledore style old. I have found the fountain of youth, and it is guarded by handsome Germans.

The Wizard Formerly Known As Dr. Jonas took me on a tour of the facility, stopping periodically to show me a celeb pic on the wall. Every once in awhile, some patron would give him a high-five [presumably forfeiting a year of their life to him] and he would mention that they fight in the MMA or some equally terrifying spot. The place was crawling with hulked out giants.

He ushered me into the freezing room, and to my delight it was filled with smoke show babes and Hagrid sized basketball players. Have you ever stood near a basketball player?! You feel SO wee!!!!

Feeling super comfy in my own skin next to my doppelgänger

I got changed into my robe, knee socks, and gloves, and The Cryo Wizard secured my earmuffs and facemask. I was instructed by various hotties to enter the chamber, take off my robe, and keep myself busy for 1 minutes and thirty seconds. UGHHHH alone with my own thoughts for that long?! If the cold didn’t kill me, the self-reflection would.

But, like Jessie Spano on caffeine pills, I let my mask of bravery slip. I was getting…cold feet (don’t ruin this Carly b

ut you’re killin it) but was assured by the clear skinned German wizards and the basketball giants alike that I could leave the chamber anytime I wanted to! Also, they let you play whatever music you like in there!

To further ease my fears, they told me a quick bedtime story. Apparently the youngest person ever to go in was a 4 year old girl, who went in with her father and danced to the Frozen (!!!) soundtrack. Let it go, hot dads. Cold dads are so fetch! Then they shared that the oldest person was 94, she went in being carried out of her wheelchair and came out walking on her own. What fantastic folklore!

I felt better armed with the knowledge that both babies and oldies could sustain the temperatures, and got ready to enter the chamber. To my disdain, my new friends did not carry me in.

I hung up my robe and felt pretty confident that no one was seeing my naked body from the neck down BUT the pictures I made them take of me tell a different story. I’m about as tall as you can be for a lady if you have any amount of bodesty [that’s body modesty. And yes it’s brilliant]!

But soon, bodesty (yasss) was the furthest thing from my mind. Guys! It was so cold!! I could feel the moisture from my nostrils clamming up. THE grossest thing to feel.

What was bizarre about this level of cold- is that the blood doesn’t rush to your skin like in a Boston winter. Instead the blood starts rushing to your core because your body thinks it’s dying. Fun facts!

Before I knew it- my minute.5 was up. I came out and announced to my new posse that I was filled with adrenaline and may be addicted. They actually cheered! I FELT SO EXHILARATED.

Obviously at the height of my feel-goodery they told me the best thing to do after Cryotherapy was to go on the elliptical to get my frozen heart rate back up. UGHHHHHHHHHHHH forget it. Love affair, over. 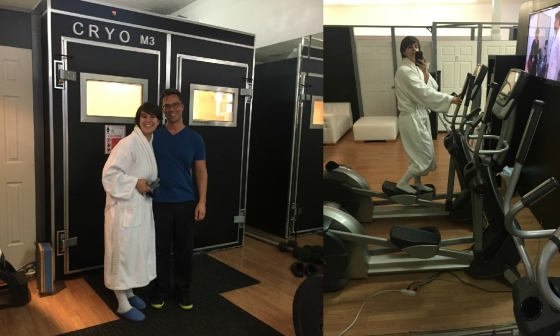 After I got changed back into human clothes I burst out to tell my best friend The Wizard how impressed I was with the drug inducing energy of his facility. I hope he’s reading. Hi Dr. Kuehne! Thank you!

I could not come down from my high. I had to celebrate my happiness somehow! So naturally I did the coolest I know how to do and called my Dadman.

He asked me how I felt- free from aches and pains? Well, kind of I guess. Slimmer? Well, not really. Skin glowing? Not that I can see, no. Energized like I just drank a Red Bull Jenkins? Fuck. Yes.

So perhaps I need to be going 5 days a week (for this they offer monthly passes) to reap the benefits of being a cryogenically frozen. But at $65 a pop(sicle), it may be a little too rich for my blood to try out again. Luckily, the good people at CryoHeathCare gave me my first round free! I fucking love those guys.

So, have I found a forever fad? Probably not. But I can confidently say that I would have been happy as an Ipswich clam to pay $65 for that first experience. Carly seal of fad approval!

One thought on “Cryotherapy: Flash Freezing Myself into Best Friendship (in a -260° Box)”