Think about your perfect friend-hang: a low-key bbq perhaps. A Saturday evening chill-zone at dusk with your besties, some Splashy Pomatinis in hand, some Big Macs on the grill (to heat them up- they had a long ride over from Micky Ds!) and the “Happy Pop” Songza playlist providing your soundtrack to star gazing.

NOW THINK OF THE OPPOSITE OF THAT. The world has gone insane, and the latest kewl new thing to do with your pals includes a stressful time limit, a fight to escape a windowless room, and a small Wisconsian laughing at your embarrassing attempts to do something well.

Even HoLlYwEiRd has jumped on the band wagon, opening up themed escape rooms for various film openings. ESCAPE ROOMS, MAN! These fuckers are pure profit. There are some fun articles about the lucrative business of opening up one of these puppies, but I digress.

Basically, you are locked in a room with a few other people (usually 10-15) and instructed to find a way out within a limited amount of time (usually 60 minutes). It’s part puzzle, part video game, part team building activity, part scavenger hunt, and part test to see which one of your friends cracks first.

As a tween princess and an ebaumsworld’s enthusiast, I spent a lot of time playing similar games online (Crimson Room fans in the house?) and was actually very excited when I started to see these crazy billboard start popping up around LA. But honestly, I was not convinced that it wasn’t some sort of a scam to get gullible young women to lock themselves in a basement. Go to craigslist, dingdongs!

As popularity grew, and legitimacy was quantifiable, I knew that I had finally found my first Social Trend to try out. Oh, 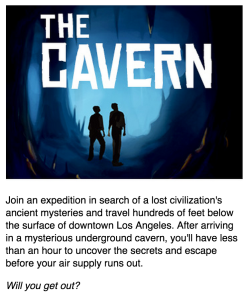 you didn’t know I had trend tags? I’m in the BUSINESS of pretending to be a blogger, guys! I do all sorts of bloggy stuff!

After doing some research, I settled on Escape Room LA: The Cavern. This escape room promised X-Files level weirdness mixed with National Treasure smarts. The perfect combo. And yeah I know that Indiana Jones would have made a good example here, I made the best choice for all of us.

I gathered 10 friends (aint no strangers going to help ME escape a room), picked the perfect night for shenanigans (a Tuesday night 3 weeks in the future! Casual!) and began planning my best sexy-archeologist outfit.

I arrived downtown to an unmarked building, Went up the freight elevator to an indescript floor, and arrived into a long corridor. WAS I IN THE RIGHT PLACE? Chances are I was, as my best friends were sitting in the hallway. Phew!

We watched as the crowds in front of us left their experience. They were buttoned up in suits and smiles and seemed positively giddy about not making it out alive. The business zombies left and our drive to make it out of this alive only intensified.

After I got my tottallynotstaged photos out of the way, we were ushered into the room where our guide began giving us the low down. 50 minutes, no cell phones, if something seems like it doesn’t want to move then don’t move it, otherwise everything is fair game. The object of the event was to uncover the clues to find the escape route.

Probably Steph alerted us that only 52 groups have made it out of The Cavern to tell the tale. That’s a wee 14%! She had confidence in us though, and that confidence gave us the strength of a thousand escapees past.

Probably Steph led us into the chamber to begin our hussle. GUYS, I’M WALKING A THIN LINE RIGHT NOW; I DONT WANT TO GIVE ANYTHING AWAY BECAUSE YOU SHOULD TOTALLY DO THIS ON YOUR OWN, BUT I DONT WANT YOU TO STOP READING BECAUSE I’M ADDICTED TO THE ATTENTION. I’ll tread lightly.

The room couldn’t have been bigger than 200 square feet. It was filled with countless posters, trinkets, locked boxes, broken shit, wall paintings, and books. The best way to start is to just dive right in and spread out.

We began working on different puzzles all at once, starting with the obvious things that stuck out first. The answer to a puzzle you were working on may be the key to a puzzle someone is working on across the room, so we tried to yell out our findings as much as possible.

I’ll give a WEE example. Someone found a backpack in a corner, in that backpack was a tarp with holes cut out. If you held that tarp up on the wall a certain way, it uncovered specific wall paintings; in one of the books someone found, there were pictures of various wall paintings with words associated to them; we used that dictionary book to decode the exposed wall paintings, which led us to a clue about where a key was hidden. We went to find that key, which opened a locked box with other clues. WHOA. It was intense.

Tensions grew as alarms went off every 15 minutes or so to warn us time was running out. The rockstars of the group began to kick it into high gear while the slackers (me to a t) managed to keep busy by looking intently at the clues we already had figured out.

Everyone was working in small groups across the room. Probably Steph kept giving us the sweeeEEEEeeettTTTtesssTTTT “hints” like “that book probably isn’t interesting to you” or “did you read that poster? You’ll like it.” Sweet, sweet Probably Steph only wanted the best for us.

As time drew to an end, it became clear we wouldn’t be making it out of the cavern alive. Probably Steph assured us that we were so so so soooooo close but HONESTLY, I am not convinced that she doesn’t say that to all the babes. Never the less, she was either very proud of our efforts, or very disappointed in our shortcomings. Story of my life.

Probably Steph led our good looking crew back to the main room to take important photos of us and our failures. We left becoming another statistic on the wall, but also with the knowledge that if our friend crowd was stuck in a dire situation, we would certainly die.

A regal AF photo of me and my fellow non-escapees. Unfortunately, Escape Room LA posted a pic of a different flavor.

In conclusions, this activity is possibly the strangest, most ridiculous thing to do with your friends. You’re stressed, it’s $30 for just an hour, and it requires you to find parking downtown. But somehow all of these things come together in one of the most inventive team building activities I’ve ever experiences.

I cannot believe the intricacy of these rooms! They are smart and weird, and after we left, we all planned to come back for Escape LAs other room: The Detective.

Last word- if you’re looking for something spicy to do with your pals, this is a crazy bizarre awesome thing you can do! The best part is, there are countless rooms for all sorts of audiences. Scary rooms, smart rooms, sexy room. Pick you grim ending. Who wouldn’t want to see what their friends are like when put under extreme pressure?!

Get a group of your favorite Yes (Wo)men together and try something new! If you’re looking for a person to join, I’m fucking IN. Full disclosure…I’m awful.