Sometimes fad ideas come from the most unlikely of places; this week’s social fad is coming at you HOT from the new guy in my QC department. Thanks Jeffrey! Don’t be alarmed when I give you a tattoo of my face- it just means you’re better than other people.

New Jeffrey from QC would probably be doubly surprised to be handed a business card and tattoo with my face and name on it- because all we’ve ever said to each other is “I’m Carly!” “I’m Jeffrey!” But using my powers of eavesdroppery, I snatched up this suggestion from a casual conversation he was having at happy hour. NO FAD IS SAFE, I WILL FIND MY WAY TO YOU.

So what is this mystery fad that is so elite, only New Jeffrey from QC knows about it? It’s a new app that sends drunk people to unknown locations. WAHHHHH???!!!! I know, you’re hooked.

It’s called Bar Roulette, my loves, and it’s the hippest thing in bar hopping. Just when you thought bar hopping was the worst idea anyone has ever had (I may only be in my mid 20s, but I feel like I’m dead) somehow the world wide web has made it fun again.

Bar Roulette is an an app (currently just a web app) that hooks up uber and yelp to send you to a mystery bar location in your area. It’s one of those things where you hear it at first you’re all UMWHATNO I DO NOT HAVE A DEATH WISH, but after you have some time to think about it, you’re all OK MAYBE I DO A LIL.

Basically, you pull it up on your browser, sign in with your uber login, choose a milage radius, and press GO! Then the app uses yelp reviews to find you a highly rated happening haunt in your area to cart you over to innn seccreeeetttt.

Do you get it!? Is it clicking?! Is this not the BEST IDEA YOU’VE EVER HEARD OF?!

“Carly, why are you so effing jazzed up on the idea of going to a bar? Aren’t you in your mid 20s?” Shut up, you killjoy. This app takes away the two worst parts of going out: driving and deciding where to go. I HATE DOING BOTH OF THOSE THINGS!

What if all of life could be like this? Could it split the bill for me in large groups? Could it pickup prescriptions at the far away CVS? Could it wait in line for me at Sqirl? Do all of the things I must do but hate doing, please!

SO whats a bougey girl like me to do when she hears of an app-ortunity (oh SHIT) like this one? Round up a crew to safe guard against sexual assault, of course!

Armed with my crew of fiercely thirsty babes (and I do not mean ‘thirsty’ in the early 20’s slang way, I mean it like physically ready to drink #mid20sRUs), I was ready to hit the means streets of LA for a night of internet based fun.

Left to Right: “Wuz Her Last Name” Rachel \ “Totally Ready Just Let Me Lie Down” Laura \ “When I Go Out I GO OUT” Keiko

After taking an hour to finish one beer on my back patio (#mid20smisconduct) we watched the Cool for the Summer music video to set the mood for the night (?) and got to rouletting.

Since it’s a web app, you have to use your phone’s browser in order to launch it. After signing in with your uber login, you set a radius (3, 5, 10, or 15 miles) and it gives you a mystery bar option, telling you only the distance from your current location.

The first bar it gave us was only .6 miles away, and being the HAPPENING CHICK that I am, I figured we’d have a better chance of getting a CCL wacky experience if we rolled again. The next bar merched to us was a whopping 1.6 miles away; watch out adventure, here we come!!!

You confirm your mystery bar destination, and the app calls you an uber. It gives you all the good details that uber usually gives you to ensure you don’t get kidnapped (it’s important people!!) like license plate, car type, and name of driver. Unfortunately, it doesn’t give you the one detail I always pay attention to, color, but I guess it always says “grey” anyways.

The uber arrived and we jovially hopped in. You have to TRY to not look at your driver’s directions, because they do not know you are using Bar Roulette. To your uber driver, you’re just another fare. 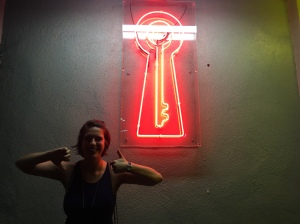 Dark pictures: get used to them

Don’t let them tell you where you’re going! As they begin to ask you “So, headed over to the olllll Bar Lub….” interrupt them and start screaming “WE DON’T KNOW WHERE WE’RE GOING SHUT YOUR MOUTH AND DRIVE.”

While we were waiting in a two person line, the best thing ever happen: a gigantic line formed behind us. Best night ever alert!!!!

When you enter Lock & Key, you and your party are shown in to a closed off room covered floor to ceiling in locks and door knobs. You have to find the door knob that opens the door to the bar!!! Isn’t that kind of fun and wild! I felt young again (#mid20sisprettyyoungshutupcarlyyourebeinganasshole).

We entered into a decadent atmosphere of hot young bar rats, but like, the kind that look like they’re about to say “but where’s the dannnceeeee floooorrrrr???!!!!”

We went to the back bar and ordered some fancy cocktails. I ordered something appropriately called The Secret Society, which the cutey bartender delightfully lit on fire before serving to me. Does this mean we’re married?

After finishing our first round, we decided $14 cocktails were a little rich for our taste (egg whites cost like 1 cent!!! Why is this $14?!) and went to play our second round of Bar Roulette.

We arrived to our second mystery location which ended up being a beer and wine bar at Hotel Covell, a boutique getaway in Los Feliz. The crowd was disillusioned and hat-bearing, but they have you order by describing what kind of wine you’re in the mood for! So, if you’re like me, you get a beer.

We lost one of our bar hopstresses to the witching hour, but decided to press on for round three of Bar Roulette; we were addicted.

Our third time playing brought us to a bar filled area of Silver Lake. After confirming the exact street address, we made our way to our 3rd mystery location, Barbarella Bar, a tall ceilinged Italian restaurant. There is a lot of red velvet there, it’s all you need to know. We met a man who told us about cameras and his tattoo (ughhhhhhhhhhhhhhhhhhhhhhhhhhhh) and the Lovely Keiko bought us a round of candy colored shots. SHOTS, I TELL YOU! I’M ALLLIVVVEEEE!!!!

In one of these pictures, everyone is happy

The bartendress alerted us that she was closing down the bar and it seemed like a good time to close down our night too. We called a real uber from our uber app and headed back to my abode.

To recap, we went to THREE bars, with WACKY MOs, had FOUR drinks, engaged in NO discussions about where to go next or whether to stay put, and SHUT DOWN A BAR. By the numbers, this is possibly the wildest night I’ve had since I walked into an exposed wire after seeing a sign for chicken and waffles in 2011!

I got to say, the whole experience was pretty flipping coolio. If I could give it two thumbs up, I would, but I don’t judge things like that. And for the record, the three ubers cost me less than $15 all together! ENDORSED!!!!!

One thought on “Bar Roulette: Feeling Young (As Always [For Once])”